WELL-DESERVED PODIUM FOR HUGHES AND CAMPBELL-WALTER

Warren Hughes and Jamie Campbell-Walter took a podium finish in todays FIA GT1 World Championship race at Navarra in Spain, cementing the Sumo Power GT teams third place in the Teams Championship standings.  Their team-mates, Peter Dumbreck and Michael Krumm had a tough day, retiring from both races, and the Swiss Racing Team drivers had an especially difficult time this afternoon, both cars also retiring from the race.

Campbell-Walter made a storming start in this afternoons main race, moving up from fifth on the grid to second place after the first few corners.  He lost a couple of places when a short sharp shower came down a lap later but recovered to third before handing over to Hughes during the pit stop.  Hughes then held off a charging Aston Martin driven by Tomas Enge all the way to the flag and took a well-deserved podium finish for the No.22 Nissan GT-R.

In this mornings qualifying race it was the No.22 Nissan GT-R that came out on top, taking a fine fifth place at the finish. Both Warren Hughes and Jamie Campbell-Walter drove incredibly well and set up a great grid position for the main race.  Their team-mates Michael Krumm and Peter Dumbreck ran out of luck on the last lap after a brilliant race that saw the No.23 car progress from 17th on the grid, all the way up to eighth.  A fuel starvation issue stopped the car on the last lap, leaving the drivers with a big task ahead of them in the second race.  Both Swiss Racing Team Nissan GT-Rs gained ground on their grid positions with the No.3 car of Karl Wendlinger and Henri Moser racing to 14th and the No.4 Nissan GT-R of Seiji Ara and Max Nilsson moving up from 18th to 13th. 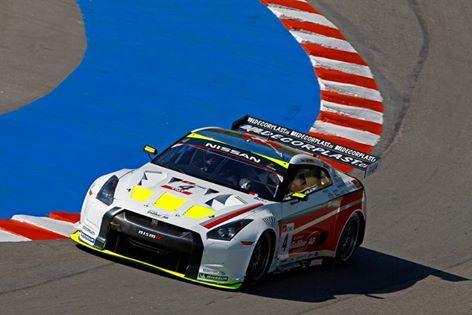 Peter Dumbreck also had a good start but just as he was thinking he had survived the melee he was left with nowhere to go when the car in front of him stopped, but only because the two cars ahead had spun.  Dumbreck pitted with a slow puncture and rejoined the fight but unfortunately the cars power steering had been damaged in the accident and he had to retire.

The Championship Race really couldn’t have gone worse for the Swiss Racing Team as both of its Nissan GT-Rs retired on the first lap. Karl Wendlinger was hit by a Lamborghini and Seiji Ara was in the unfortunate position of being the car with nowhere to go that was then hit by Dumbreck.

Both Sumo Power GT and SRT are now busy re-prepping the Nissan GT-Rs, ready to send them on their way to South America.  The freight leaves from Navarra over the next couple of days so, after a busy race weekend, the teams now have a lot of packing to do.

Jamie Campbell-Walter: I got a great start as both the Fords in front of me were asleep so I did them both straight away.  I outbraked some more into turn three and found myself in P2.  When the rain came I had a couple of big moments so I took it easy and let a couple of cars pass. I could see it was just going to be a shower so thought the safest bet was to let them go and then pass them when the rain started.  Our car has been great all weekend and this is a fantastic result for the team and for Nissan.

Warren Hughes: Tomas Enge and I were matching each others lap times during the second half and we were starting to catch the second placed car.  I found myself counting down the laps to the chequered flag as I wanted to be sure of third but also wishing we had a few more laps so I could attack for second place.  I drove to the limit today but made very sure I didnt go over it as Tomas would have pounced.

Peter Dumbreck: I managed to stay right out of the trouble at the start of the second race. Just as I settled into it a car spun on the back straight, the guy in front of me braked hard and I hit him. I ended up with a slow puncture but then we also had a power steering problem and had to retire.

Michael Krumm: The first race today was going really well; better than expected in fact. We had made it all the way up to eighth from 17th.  The car stopped though on the last lap with fuel starvation so we would have to do it all over again in race two.  We made some adjustments to the car between races and it was faster so we were confident of taking fifth or sixth place. Peter was unlucky after making a great start. We were equally shocked and disappointed about the accident but we will look forward now and hope to finish the season off well in South America.

Seiji Ara: The start wasnt bad at all for me so I was pleased. I was running in front of the No.23 car and just before the back straight two cars spun in front of me so I had to brake very hard and then I was hit by No.23.  I had to go straight to the pits and retire so its a big shame for us.

Were very disappointed to have both cars retire on the first lap.  Seiji had nowhere to go when cars spun in front of him and Karl was taken out by Peter Kox in the Lamborghini.

Its bad as we are on the pace now with the car.  For this mornings race the No.3 car was on old tyres but we had two good sets saved for this race so to go out on lap one is a real shame and we want to know when we will have some luck!